We landed excitedly in Alaska in early February with an internship lined up, a few hundred bucks, and colorful plethora of wildly misconceived notions : it is a giant ice cube where polar bears run amuck, grizzlies attack at the slightest provocation, and every man, woman and child hunts moose for their dinner. Of these misconceptions most have been broken as definitely untrue, usually accompanied by a cringe of embarrassment.

In short order we acquired a truck and then a dog, which seemed to be required by law, and moved into a shoddily built dry cabin on six acres, not a neighbor in sight, down a gravel road in the bog. “Dry” cabin does not mean there’s no liquor, quite the contrary, because once you start to live in a cabin with no running water in Alaska, you suddenly really want hard liquor. Dry means there’s no plumbing, and there’s quite a few of these cabins in the frozen north; it’s often easier than putting up with freezing pipes all winter. We deemed it the Bogland Estates, or Chateau de Bog.

Initially, I was thrilled. The exquisite freedom of six acres! So little rent on this bogland with no plumbing! I don’t need running water, showers are for wimps! Early spring months passed by in a rosy glow, buffered from reality by our exuberance, anticipating the snowmelt and longer days. Trips to the frozen outhouse required mental preparation, gently coaxing myself, “Okay, it’s time. You can do this. Walk over there. It’s not that gross” (it undeniably was). I’m not ashamed to admit I peed in buckets to avoid moose encounters in the middle of the freezing night.

Spring nights were spent staring intently into the fire stove. I started dreaming about bears, as though my subconscious was trying to connect with the spirit of Bear, and because that which you fear has a way of finagling itself into your dreams. Mini earthquakes rattled the flimsy frame of the cabin for a terrifying few minutes every now and then.

We found ourselves quintessential Alaskan gigs for the summer: him on a fishing boat bound for Bristol Bay, me at a bear viewing bush flight company. He left for the sockeye salmon season just as the sun started to linger longer in the sky.

I turned to the water, tracking my days in the movements of tides thrumming in and out of the bay; the cycles were a sureness, a consolation, something to hold onto. A moose and her two calves began to visit my front yard every morning and evening like clockwork, ambling along their own paths, often emerging unexpectedly from behind the outhouse, stopping in their tracks to eye me as I eyed them; a strange daily communication.

Months of living alone in a dry cabin will turn you a little feral. I realized this with certainty when the bear guides suggested that I shower. Hauling water, bathing in buckets, filling the wood stove, WiFi a distant memory; survival chores take up the bulk of the day. It is essentially camping with the slightest veneer of a home.

Why on Earth would anyone do this?

In that unwashed state, I felt glimmers of the reason that propelled me here in the first place, driven by some inner force, some inner knowing that in placing your body in a wild environment, some alchemy of spirit can happen. 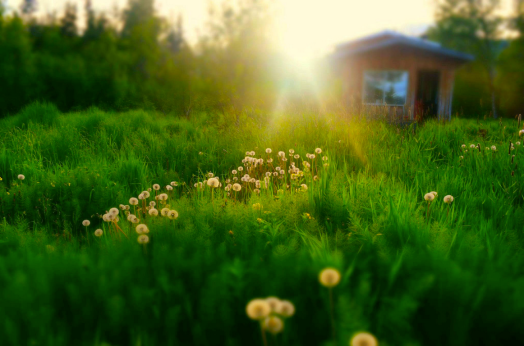 Living simply, immersed in the dirty off grid, I was able to release myself into wildness. Becoming an observer of nature, letting the changing of the seasons wash over me, really feeling the building of every lunar cycle, the waxing and waning across the sky over the mountains. It’s slower and more subtle than we usually perceive, but always there for us to feel.

Midnight sun began roaring in earnest above, building in an intense crescendo towards the solstice, making my nerves and metabolism go into frenzied overdrive. A creative exuberance pulsed through my veins; the joy of an Alaskan summer in full swing, so gorgeous it seems to shimmer and shake and glitter.

The water called me to it every day, drawn to the liquid immensity underneath me. The scent of algal blooms, kelp, and sea rot became the sweetest intoxicants to inhale. In the bay, I could breathe in and out with the environment, feeling the intimacy and connection with the salty water. I could notice the exchange of gases between my inner worlds and outer atmosphere, my skin feeling more and more like a porous interface, aided by an awareness that we are made of water and elements recycled from the stars.

Otters and seals in the water tracked my movements; I could feel their awareness on me. Water birds dove and skimmed. Bull kelp grew large and bobbed to the surface in alien looking blobs, their long roots tethered to the sea floor like an underwater forest, otters slumbering coiled in the fronds. Salmon from the open ocean returned to their spawning grounds in a mass frenzy of movement into the streams and tributaries of the bay. Orca hunted the seal, seal hunted salmon.

As the light began to shorten again, the animals responded. Salmon skeletons began to wash ashore; their decaying remnants fed the ocean. Bears prepared for hibernation and migratory birds attuned to the Earth’s electromagnetic fields to lead them south for winter, guided by a magnet in their brains.

Having nothing but the bare necessities: shelter, food, water, space, allows you to open the curtain behind the veneer of civilization to reveal a natural world so complex it blows your mind: the goosetongue grass that feeds the bears fertilizes the humus and michiorzhial fungi web of the forest floor that in turn grows the spruce trees and blueberry bushes that shelter and feed the bears again. The cycle repeats everywhere.

This indivisibility with nature, it slowly falls over your body. In the ever-present awareness of large creatures around you, you feel yourself to be woven into the web of life — human, not superior. We hunt moose and dipnet salmon in order to stock our freezers, participating in the universal preparation for winter, just like the other creatures. It casts in stark relief how much we rely on and need our environment and our animals to be healthy.

We humans think, ponder, reason, extract, build, create masterfully, but who is to say a tiny songbird completing its 1,000 mile journey across the Atlantic using magnetic poles as its guide has accomplished a feat any less epic? Or a family of whales navigating their blue world using sonar to ride ocean currents from one hemisphere to another? Or the cultural knowledge bears have of their ancestral lands, passed down through generations?

To learn and witness these myriad adaptabilities and ways of existing in the environment, whether underwater or skybound, is to know there is a force of creation. The biodiversity of creatures we live amongst is a tangible reminder of this: endless forms, most beautiful. I began to feel that in conserving our animals, honoring the sacred ecology of wild creatures, we would be conserving our humanity.

I began to see our skin as an interface holding something encased. This something, You, the endless god knows of you, in a thin cell, sharing the world with other conscious beings. Whether its a bear smelling prey miles away, or a migratory bird seeing Earth’s magnetic field, or a newborn whale learning to sing, or deaf and blind human building up a rich tactile awareness with which to experience and communicate. Life, in all forms, has a Oneness, an undeniable divine interconnectedness. This awareness toppled me from the supposed top of the food chain down into the grit and muck, and in that muck I found an intimacy, like returning home.

This could happen anywhere. There is equally unruly wildness in a patch of grass between highway medians in Newark, but by the very fact of its vastness and its creatures it seems to happen a little easier in Alaska. I still won’t feel resourceful until I’ve fished and hunted for my sustenance, and I’ve unequivocally determined that running water is the bomb, but for now I can still feel it working its strange, slow magic on me, an alchemical change, a cosmic homecoming, and I know I won’t ever be the same.

This piece was originally published at Medium under the title ‘A Cosmic Homecoming’ and is reproduced here with kind permission of the author, Jennifer Tarnacki